NEWS: $1.5M for summer repairs at DOE middle, high schools
The Governor’s fiscal team will be providing, at the Governor’s direction, $1.5 million for the Guam Department of Education to be used specifically for maintenance needed before the start of the new school year.
“With the $100 million project that would renovate Simon Sanchez High and make repairs at schools having been on hold due to procurement protests and now having to push the restart button, we have to go in and do what we can to help address the major issues before students return to class,” the Governor stated.
The effort to provide additional funding is in response to a letter from Superintendent Jon Fernandez asking for help with repairs that will be made over the summer. The letter comes after Senators overrode the Governor’s veto on a bill that changes the procurement process on an effort to renovate Simon Sanchez High and make repairs at other schools.
In the last two weeks, Guam DOE has been asking the Legislature for funding of over $1 million to make repairs at schools this summer. The Legislature was considering two bills that would provide more than $500,000. However, last week, legislative leaders decided to send both bills back to committee for additional discussion. Meanwhile, classes for the new school year start in two months.
In his letter, Superintendent Jon Fernandez noted that there are deteriorating canopies, broken fence lines, condemned portions of campus, temporary classrooms in disrepair, air circulation/ventilation, and aging restroom facilities.
“After my school visits, I am requesting for any additional support you can provide to help with the work needed at other secondary schools, including Oceanview Middle School, Southern High School, Agueda Johnston Middle School, and Benavente Middle School,” the Superintendent stated.
The Superintendent added that as the public school population waits for the $100 million project for the schools “we still have an obligation to keep our current facilities in safe condition and able to be occupied by teachers, parents and students.” 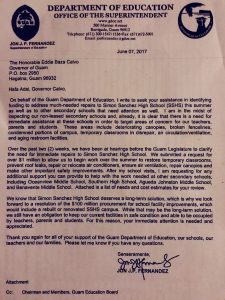 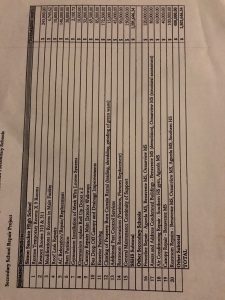