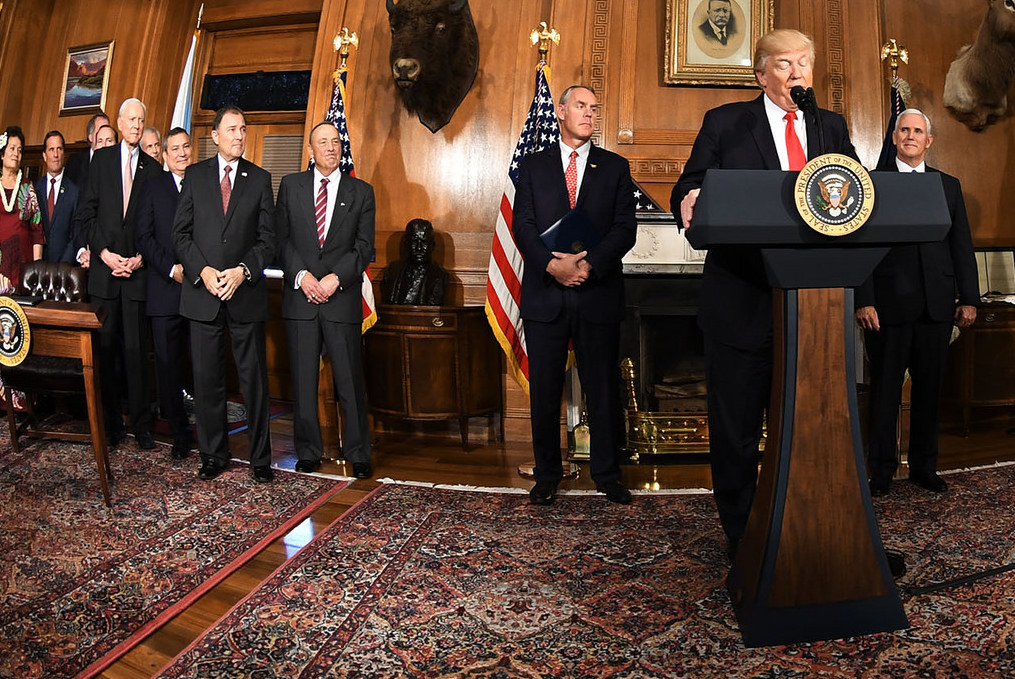 Photo provided by Department of Interior

April 27, 2017 (Hagåtña) — In response to a call from various Governors, President Trump early this morning (Wednesday night in D.C.) signed an executive order calling for a review of Designations of national monuments under the Antiquities Act of 1906.

Governor Eddie Baza Calvo, along with Governor Ralph Torres, Commonwealth Northern Mariana Islands, and Governor Lolo Moliga of American Samoa, sent a joint letter to President Trump in March asking him to remedy the restrictions on fishing in waters surrounding the Pacific Island territories and commonwealth.

“Our island communities depend on the ocean for food security and economic opportunities. Our Samoan, Chamorro, and Carolinian cultures are interwoven with the marine environment and fishing,” they wrote. “The monument fishing restrictions are unnecessary and impede our socioeconomic and cultural stability. The promises of previous administrations and environment organizations of monument co-management and revenue generation have not been realized.”

During a signing ceremony this morning, President Trump noted that these restrictions by the federal government strip authority from the states and territories.

“The previous administration used a 100-year-old law known as the Antiquities Act to unilaterally put millions of acres of land and water under strict federal control … eliminating the ability of the people who actually live in those states to decide how best to use that land,” the President stated. “Today, we are putting the states back in charge.  It’s a big thing.”

“I am pleased to be joined by so many members of Congress and governors who have been waiting for this moment, including Governor Herbert of Utah… Governor Calvo of Guam.  Thank you.  Governor Torres from the Northern Mariana Islands.  Thank you, thank you, Governor,” the President stated.

Governor Calvo said the executive order is a positive step and a sign that the current administration hears the concerns of the states and territories.

“The creation of the Marine National Monuments in the Pacific was made unilaterally and without consideration to the people who havefished in these waters for nearly 4,000 years,” Governor Calvo stated. “The process ordered through today’s executive order allows our people to voice their concerns and have more control of the waters surrounding our islands.”