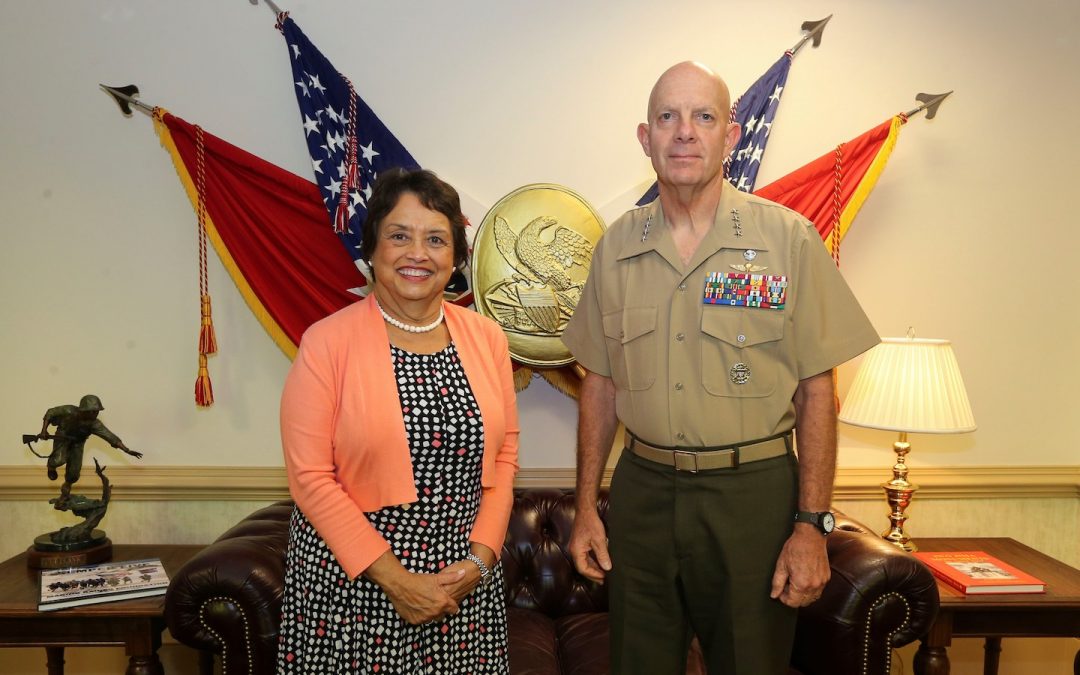 Washington, D.C. – Governor Lou Leon Guerrero, in continued meetings with federal leaders, met with Pentagon officials to discuss a range of issues and a renewed partnership between the Government of Guam and the Department of Defense.

Meeting with Undersecretary of the Navy, James F. Geurts

On Monday, Governor Leon Guerrero kicked off the Pentagon meetings with Undersecretary of the Navy, James F. Geurts. Undersecretary Geurts serves as the deputy and principal assistant to the Secretary of the Navy, as well as the Chief Operating Officer and Chief Management Officer for the Department of the Navy. Additionally, he oversees intelligence activities, intelligence-related activities, special access programs, critical infrastructure, and sensitive activities within the department.

Governor Leon Guerrero shared with Geurts her top priority of seeking federal support and funding for the construction of a new public hospital, the crowning component of a 21st-century healthcare center of excellence.

She also shared her support for the Guam Defense System and is hopeful that both the House and Senate Armed Services Committee and the respective appropriators will fully fund this initiative.

The meeting also covered discussions on economic diversification and the idea of bringing additive manufacturing, commonly known as three-dimensional printing. Both leaders agreed the emerging technology could support Guam’s economic growth and resiliency and strengthen the island’s position in the Asia-Pacific region by increasing military capabilities at lower costs. Additive manufacturing benefits include flexibility, design freedom, time-to-market, and mass customization and production.

“The tyranny of distance could pose opportunities for Guam as additive manufacturing methods are being integrated across the Armed Services,” said Governor Leon Guerrero. “Guam’s economic resiliency is heavily dependent on industry diversification, and our island is in the perfect position to experiment with new technologies, attract investors, and build up our workforce, which I envision could take root at the University of Guam’s School of Engineering.”

In addition to supporting efforts to explore additive manufacturing, Undersecretary Geurts expressed his commitment to ensuring Guam residents, especially students, have equal access to the Navy’s robust internship and workforce development opportunities. Currently, the Navy has a growing list of technology bridges across the country. These “tech bridges” enhance collaboration between the Navy, academia, and the private sector by accelerating learning and information sharing in venues outside of military bases.

In Governor Leon Guerrero’s meeting with the Commandant of the U.S. Marine Corps, General David Berger, the Governor, again raised her concern with the recent increase in denials of H2-B visa applications for military and civilian projects. General Berger committed to working with the United States Citizenship and Immigration Services to ensure this matter was reviewed as it relates to national security. He acknowledged that although there has been a slowdown in the military construction timeline, the Department of Defense remains committed to the project’s full completion.

“I appreciate the time spent with General Berger to discuss issues ranging from the ongoing military projects to the construction of the new hospital,” said Governor Leon Guerrero. “We remain committed to a One Guam approach, and we look forward to continued communication and collaboration with our military partners.”