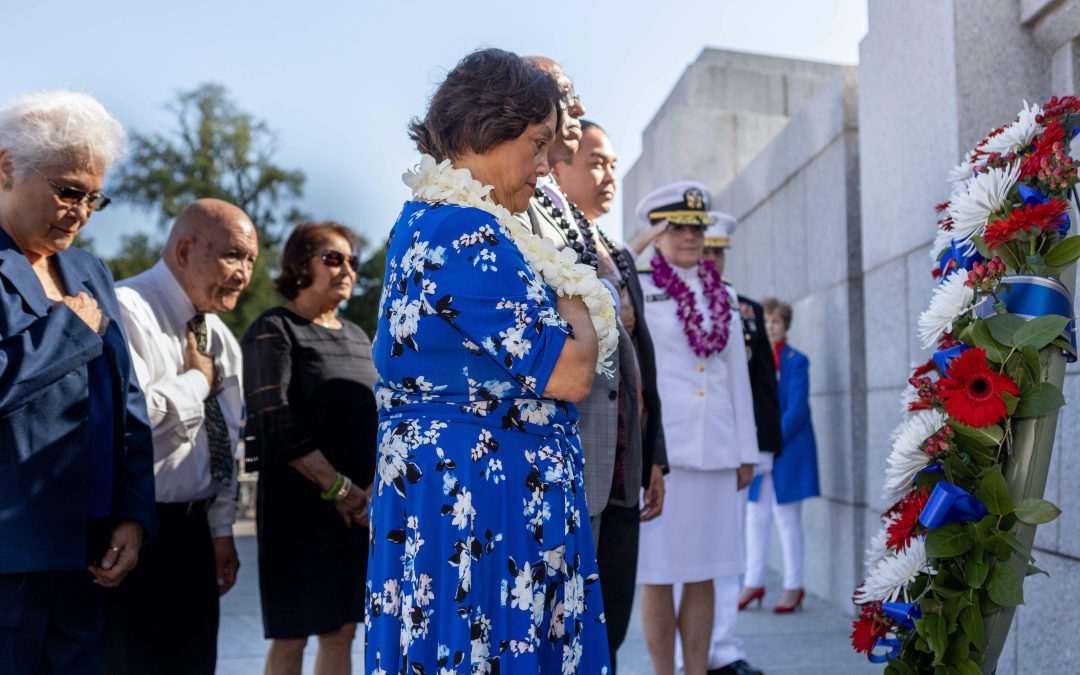 Hagåtña, Guam – Governor Lou Leon Guerrero addressed an audience of military service members, White House dignitaries, and CHamorus living in the U.S. during a Wreath Laying Ceremony held to honor the 78th anniversary of the Liberation of Guam. The event was hosted by the Guam Society of America (GSA), Guam Visitors Bureau (GVB), and the Washington D.C. Liaison Office, led by former Congresswoman Madeleine Bordallo, on Thursday, July 14, 2022 near Guam’s commemorative pillar at the World War II Memorial in Washington, D.C.

“We recognize the brave heroism of our liberators, whose devotion to democracy brought forth the light of a new day for Guam and our people,” said Governor Leon Guerrero, in her remarks. “We celebrate the legacy we have rebuilt since those dark days, and our tireless commitment to making our island a stronghold of hope, a lighthouse of liberty, and a community united.”

The ceremony featured memorial traditions including the Presentation of Colors, performances of the U.S. National Anthem and Guam Hymn, recitation of the Inifresi and a CHamoru blessing chant by GSA, and a brunch reception at the Hall of States. Remarks were given by Bernard Aguon, GSA President, Donald Remy, U.S. Deputy Secretary of Veterans Affairs, Keone Nakoa, Deputy Assistant Secretary on Insular and International Affairs, and Governor Leon Guerrero. Additionally present for the ceremony were Congresswoman Amata Radewagen, American Samoa; Congressman Kilili Sablan, Commonwealth of the Northern Mariana Islands, and U.S. Senator from Hawaii Mazie Hirono.

“We will never forget the sacrifices of all those for whom our remembrance is dedicated, from our fallen war victims and survivors, to the troops of history who made today’s prosperity possible,” Governor Leon Guerrero said. “Each of them has our enduring gratitude for ensuring the continuity of our legacy. A legacy that lives beyond the memorial walls and stone tributes. A legacy we will pass on to Guam’s future generations, who will keep the torch of liberty burning.”