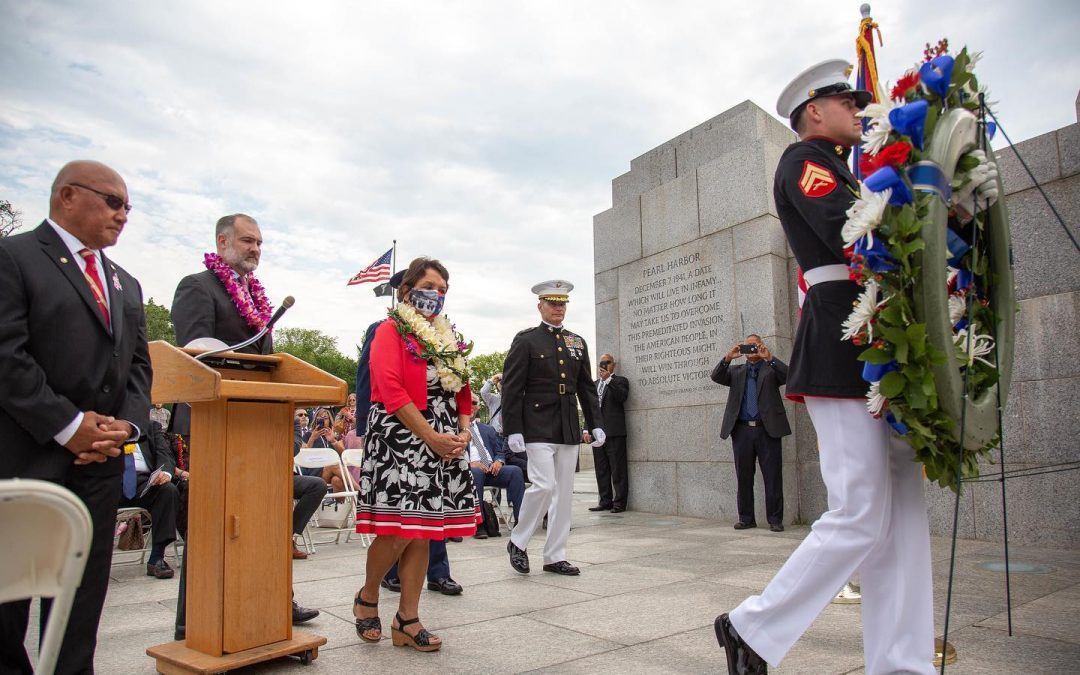 Washington, D.C. – On Friday, July 23, Governor Lou Leon Guerrero, in an inaugural memorial ceremony, laid a wreath at the World War II Memorial, Washington, D.C. Guam pillar in commemoration of the 77th anniversary of the Liberation of Guam. The event was hosted by the Guam Society of America, Inc. (GSA), the oldest Guam organization in the continental United States. Established in 1952, the society was formed by a group of CHamorus living in the nation’s capital who wished to represent their island home in the National Conference of State Societies.

“I am very fortunate and indeed honored to be here this morning standing in front of the pillar of Guam at this WWII memorial,” said Governor Leon Guerrero. “This memorial was erected to honor and remember our fallen heroes who sacrificed their lives in the name of democracy, freedom, and peace for our country and most significantly to us as CHamoru—peace for our island and our people as they at one point had peace and freedom taken away from them.”

U.S. Department of Interior Deputy Secretary Tommy Beaudreau, son of a combat marine, also provided remarks stating, “It is a personal honor to be able to celebrate and commemorate the Liberation of Guam, especially in the presence of survivors… your stories are so important.” WWII survivors included Juana Cruz, Larry Cruz Sr, Segundo Sanchez, and John Cruz, all of whom now reside in the continental U.S.

“I would like to also recognize the organizational and cooperative spirit of the Guam Society of America. Your leadership in holding our culture and traditions alive in the United States is amazing,” added Governor Leon Guerrero.

This marked the GSA’s first event since the start of the COVID-19 pandemic.