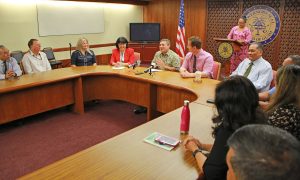 Administration, Attorney General work together to meet federal mandates
April 13, 2017 (Hagåtña) — The Department of Corrections is no longer under a federal consent decree, which was imposed on the facility in May 1991.
“This is great news for the administration and the people of Guam. I want to thank Lt. Governor Ray Tenorio and Attorney General Elizabeth Barrett-Anderson for assembling an amazing team to ensure we met the consent decree requirements and didn’t fall into a receivership,” Governor Calvo stated. “Bringing together the expertise from various agencies to address the needs of the Department of Corrections in a new and innovative approach created significant improvements to the conditions and the health services provided at the facility for years to come.”
Earlier today, the District Court of Guam lifted the 26-year consent decree imposed to remedy constitutional violations. It required the Government of Guam to improve health and safety conditions at the Mangilao facility.
Lt. Governor Ray Tenorio stated his thanks for the teamwork that made today’s court decision possible.
“For the past two years, the Lt. Governor’s Office, along with the Attorney General, the Department of Corrections, the Guam Memorial Hospital, Guam Behavioral Health and Wellness, and many other government agencies; met weekly to work our island through and out from a 26-year-old consent agreement. As result of this work, healthcare has improved significantly at DOC the past two years. Kudos to all those individuals who worked daily on this effort, and special thanks to Governor Eddie Calvo for his unwavering support on this important initiative. This is what happens when people work together.”
Governor Calvo and Lt. Governor Tenorio also thanked the Department of Public Works, Department of Public Health & Social Services and the University of Guam.
Costly receiverships
Failure to meet the federal standards would have lead to a federal receivership, which means the operations of the facility would likely have been controlled by the federal government through a third-party paid by local tax payers.
Governor Calvo noted that it’s important that the people of Guam continue to operate their government. Just four years ago, in February 2013, Guam Behavioral Health and Wellness Center was released from federal receivership, which cost local tax payers millions of dollars in contract costs for the third-party.
Since coming into office in 2011, the Calvo Tenorio administration had been working to resolve the issues.
“This dismissal means that GovGuam has full reign over DOC in regards to its operations. It also means the federal government is confident in the operations of DOC under the local government,” DOC Director Tony Lamorena. “This is a weight off of our shoulders. This proves that the hard working men and women of the Government of Guam are more than capable of doing what it sets out to do, especially when they work together.”
* For more photos and the video of the press conference, go to Facebook.com/eddiebazacalvo.*