Tweet
Share
Share
Pin
Email
Print
WhatsApp
NEWS: Acting Governor talks labor, dry dock with CNO
May 17, 2017 (Hagåtña) — Acting Governor Ray Tenorio met today with Chief of Naval Operations Adm. John Richardson.  They discussed two key issues for Guam: the H-2B labor shortage and its impact on local and federal projects, as well as the dry dock.
Adm. Richardson committed to working with Guam to find solutions and reaffirmed his commitment to the One Guam approach.
Acting Governor Tenorio noted that the H-2B labor issue is increasing construction costs and delaying projects.
“The overall result is a dampening effect on Guam’s economy. And we’re trying to remedy the situation because we’ve been working with our community partners in the private sector, to expand our economy and provide more jobs to Americans on Guam,” the acting Governor stated. “We are looking to build a regional work force but we need some immediate relief for the current situation.”
More than a year ago, Guam companies applying to bring foreign laborers started seeing more denials from the federal government. This was unexpected considering there were no changes in policy or law. Guam businesses went from a near 100 percent approval to the current 100 percent denial of its H-2B visa requests.
From more than 1,500 foreign laborers to augment our local work force early last year, Guam now has a little over 100 foreign laborers — not enough to assist with the military, local government, and private construction projects that are either ongoing or pegged to start in the near future.
Acting Governor Tenorio also noted the need to renew interest in maintaining and expanding the dry dock capabilities on Guam. “We’re talking about 450 jobs for Americans on Guam,” the acting Governor stated.
Congress just appropriated $9.5 million for a dry-dock on Guam in House Resolution 244, signed into Public Law 115-31. Adm. Richardson said this is a recent development and his team is looking into it.
“We believe that this will help Guam’s effort to re-establish a dry dock on the island and provide jobs to Americans here,” acting Governor Tenorio said.
Rear Adm. Shoshana Chatfield, Joint Region Marianas; Rear Adm. Stephen Williamson, Fleet Maintenance director; and Victoria Krikorian, CNO’s foreign policy advisor, joined Admiral Richardson in this meeting. 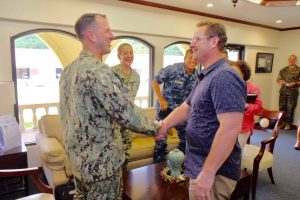 For more photos, go to facebook.com/ltgov.ray.tenorio