NEWS: Johnny Gogo named Asian Pacific Heritage Month Honoree
Johnny Gogo is 2017’s Asian Pacific Heritage Month Honoree. He currently serves as the Deputy District Attorney for Santa Clara County. Starting his career on our very island as a prosecutor with the Guam Attorney General’s Office in 1997, Johnny Gogo is committed to a life as a community prosecutor working with parents and children to prevent the younger generation from getting on the wrong end of the legal system.
“Johnny Gogo is a great example of how our people can achieve success no matter where they go,” Governor Calvo stated. “His achievement reminds us that it’s your hard work and perseverance that determine your level of success.”
“As fathers and grandfathers, we thank Johnny for all he has done to provide support and hope to our youth in becoming something more,” said Lt. Governor Ray Tenorio. “We are excited to see more of his future projects come to life.”
Johnny is currently the President of the Northern California region of the National Pacific Islander Prosecutor’s Association. His organization was founded in 2010 to encourage young Pacific Islanders to become prosecutors, lawyers, and judges representing their community. 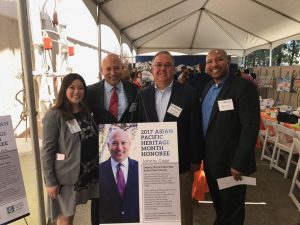