October 5, 2018
Hagåtña – Lt. Governor Ray Tenorio proclaimed October 8 through October 14 as Fire Prevention Week.
On-hand to celebrate the proclamation were members of the Guam Fire Department, Naval Base Guam Fire & Emergency Services, Anderson Air Force Base Fire Department, A.B. Won Pat International Airport’s Aircraft Rescue and Fire Fighting Unit, Guam Dept. of Agriculture’s Forestry & Soil Resources Division, Guam Homeland Security and the Office of Civil Defense, Phoenix Pacific Fire, and Falcon Fire Protection.
“In these last eight years, we have done much to grow our local fire department in order to support our community,” stated Governor Eddie Calvo. “I want to thank all of our partners for their support – both federal and private. I am very proud of the Guam Fire Department and all of its accomplishments during our Administration’s term. We have a fire truck in every fire station and increased the number of working ambulances, great successes.”
Lt. Governor Ray Tenorio stated, “Fire prevention is something we can all take part in by paying close attention to our surroundings and heeding the advice of our fire experts within the community.”
Deputy Fire Chief Joey San Nicolas was also presented an award by the Lt. Governor on behalf of the Western Pacific Island Association of Fire Chiefs for “outstanding contributions to the Guam Fire Department as the Fire Chief from September 26, 2011 to June 26, 2017 and as the President of the Western Pacific Islands Association of Fire Chiefs from January 1, 2017 to present.”
Click here to view Facebook LIVE footage of the Fire Services vehicles motorcade into Adelup in celebration of today’s proclamation. 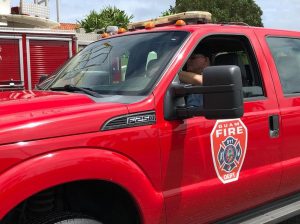 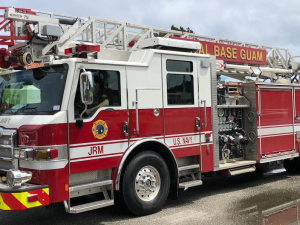 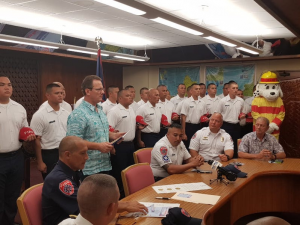