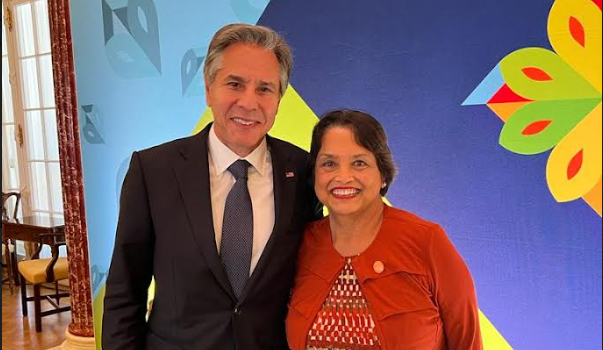 Washington, D.C. – Governor Lou Leon Guerrero gave her support of the Declaration on U.S.-Pacific Partnership presented by the Biden-Harris Administration upon the conclusion of the two-day U.S.-Pacific Island Country Summit hosted by President Joe Biden.

“We proudly mark this new milestone in U.S.-Pacific cooperation, which is due in no small part to the active federal partnerships we’ve fostered and the spirit of unified progress we’ve engaged across the region,” said Governor Leon Guerrero. “With forward-thinking plans and visionary investments, together we have prepared Guam to advance as much more than a geopolitical landscape. We are ready to seize the opportunities of increased focus and priority in the Pacific.”

As an outcome of the Summit, the President and Pacific leaders signed the Declaration on U.S.-Pacific Partnership, a vision reflecting our shared commitment to expand and deepen our cooperation in the years ahead. The Biden-Harris Administration further made commitments to implement the vision in strategic areas including: Political Leadership and Regionalism; People-Centered Development; Peace and Security; Resource and Economic Development; Climate Change and Disasters; Ocean and Environment; Maritime Security to focus on illegal unregulated and unrecorded fishing; and Technology and Connectivity.

As part of its Pacific Partnership Strategy, the U.S. will pursue four objectives including:

“These objectives build on a long U.S.-Pacific history, forged through the sacrifice of CHamorus and Pacific Islanders in World War II and reinforced by our continued commitment to supporting Guam’s critical role in the regional and global community,” Governor Leon Guerrero added. “Our Administration remains dedicated to working with federal partners to promote Pacific-wide progress in climate change resilience and environmental protection, resources and economic development, technology and connectivity advancement, and maritime and health security.”

The second and final day of the Summit featured meetings with the President, trade representatives, business leaders, and members of the U.S. Chamber of Commerce who presented on market access, commercial investment, job creation, sustainable agriculture, and fishing and forestry development.